A Look At Math Education From The Inside 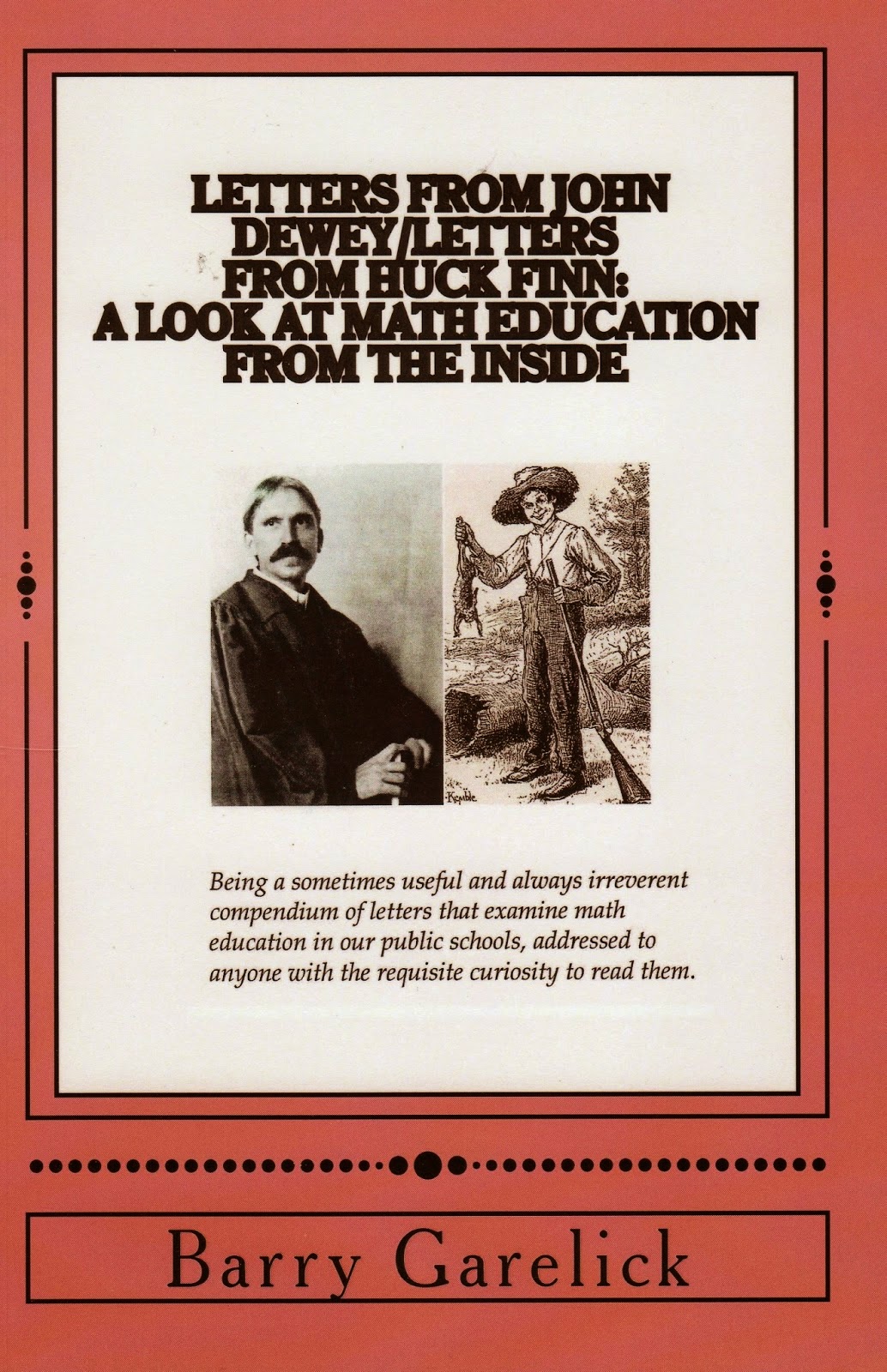 What's happening in ed schools today? I don't know. I haven't taken an ed school graduate course since the 70s. But Barry Garelick knows! He says that ed schools advocate an inquiry-based, "content doesn't matter" approach to math instruction (i.e., NCTM reform math). Moreover, Garelick states that Common Core is "interpreted along the ideologies of reform math," which is a continuation of failed reforms.

For Barry Garelick, becoming a certified math teacher as a second career has been an exasperating odyssey. He is a retired EPA analyst, has a degree in mathematics, and ponders why US students have "disturbing weaknesses in basic math skills." He decided to find out by becoming a math teacher, so he enrolled in ed school. The book is a look inside education school dogma. He discovered that future teachers are taught to be a facilitators that use minimal guidance instructional methods, especially inquiry- or discovery-based learning. Teachers are not intended to be academic leaders in the classroom.

Instead, teachers are taught that explicit instruction is bad, that group work and minimal teacher guidance are good, that memorization and practice to mastery are old school, that children learn best through discovery-inquiry activities, that children can do critical thinking without a firm grasp of background knowledge, etc. In short, Garelick found that teachers are not taught to teach in the traditional sense; they are taught to facilitate inquiry-based learning, which often leads nowhere.

Kids are weak in basic math skills because they do not get the right instruction or practice the right content for mastery. The reforms in math education or education in general have not worked. Ed school ideology conflicts with cognitive science.

Using pseudonyms of John Dewey and Huck Finn, Garelick wrote letters describing his experiences in ed school and as a student teacher. He says that the NCTM reform math "took math out of mathematics in the name of fun … [to the] "horror from mathematicians." The inquiry-based approach is a "content doesn't matter" approach. But content does matter! For example, times tables, fractions, and long division are key building blocks in a young child's numerical development and predict a child's ability to do higher level math years later.

In teacher education courses and student teaching (pre-algebra and algebra), Garelick often suspended his true beliefs to fit the NCTM mold and ed school ideology. Ed school dogma asserts that there are no right or wrong answers. There are multiple answers. That doesn't work in math, which must be carefully sequenced because new knowledge builds on prior knowledge. Students must know and perform efficient procedures that get right answers. Getting the right answer is important.

The people in charge of math education think “math (or any subject for that matter) need not be taught in any kind of logical sequence, and that whatever mastery of facts or procedures is needed can be learned on an as-needed basis because process is more important than content." This is terribly wrong.

"We are in an age of education by collaboration, by small groups, by a student-led and teacher-facilitated inquiry-based approach." Garelick observes, "I happen to believe that procedural fluency leads to understanding; once you're able to do certain procedures, it's easier to understand why they work." He points out, "There is nothing wrong with finding multiple ways of solving problems. But in the early grades, students find it more than a little frustrating to be told to find three ways of adding 17 + 69 … What I will not be doing is requiring students to do things in multiple ways."

Garelick is critical of educators who believe that students who cannot explain their reasoning by writing, etc. are doing "rote work" and lack "understanding." He writes, "Knowing how to explain something precisely doesn't come automatically with understanding." Teachers need to explain how to "explain your reasoning." Students who have difficulty writing are at a disadvantage.

The problem is that most students are not getting the right math teaching, starting in 1st grade, not under NCTM reform math and not under Common Core reform math. They are getting bits and pieces through inquiry-based learning and test prep. In other words, there are a lot of gaps in their mathematical knowledge, including facts, efficient procedures, rules, and concepts.

Yet, Garelick is still optimistic. He writes, "I do believe that given the right math teaching from first grade on, if students put in the effort, they can get through algebra. Many think I'm a fool for thinking this way. Call me what you will.”

Common Core standardized tests should not be the primary reason teachers teach or students learn. But isn't this what we have? Garelick's book will give teachers a breath of fresh air. The mastery of fundamentals  through explicit teaching, memorization, and practice actually works. Once students have mastered solid fundamentals in long-term memory, then learning more complex mathematics is possible.

Posted by ThinkAlgebra at 1:44 PM